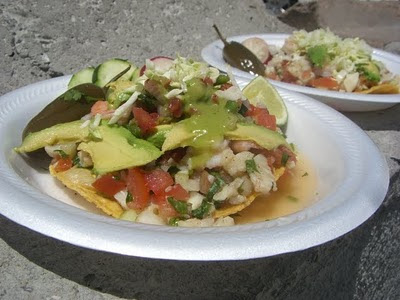 When appetite is sparked by the light, fresh, quick and inexpensive, be assured, you can be satisfied. And perfectly it all can be done at El Paisa taco cart on State Street in Salt Lake City, UT. There are many such carts on corners throughout the city but one, just one is owned by two brothers (Julio and Felipe) from a town on the Pacific Coast of Mexico. Being boys who have grown up in a village facing the sea they know fish and Ceviche. Unlike other street carts (owned principally by Nortenos, meaning big meat), they bring their knowledge of Ceviche to this little Utah town. Oh, you can get the big meat at El Paisa too, but it's not greasy. Being fish lovers, all items offered are fresh, clean and not heavy. And after an informal survey, they are the only street vendors who serve CEVICHE in SLC. Now my question is that if I were to bring a good white wine in a sippy cup could I reach seafood Nirvana right there on the corner of 9th South and State Street? Or if I ordered "to go", I think I might get rather close. And so can you and we'll see you there soon.
Posted by mick huerta at 12:12 AM 5 comments: 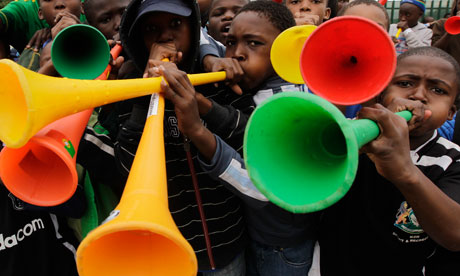 "Ayoba" is South African slang for "Super" or "Cool". I haven't been in South Africa for years yet I remember this word clearly. I was there with clear intention of chasing wine and seafood. Anyone familiar with my writings would not be in the least bit surprised. Now presently watching the 2010 World Cup televised from the new stadium expressly built in Cape Town to accommodate this frenzy of football, I am awash in memories. However, there are some things that are different. Much like the overwhelming characteristic of this year's contest will be the sound of the "Vuvuzela", a simple, one note trumpet made of plastic. I saw them when visiting but at that time they were in the hands of boys playing in the street. It was nothing more than a fun and funny toy for kids. Now during the 2010 World Cup the sound of the "Vuvuzela" is front and center. It is the instrument to express pride and joy of place and produces the din that you will hear in the background of every match coming to us from South Africa! All I can say is "Ayoba"!
Posted by mick huerta at 2:13 PM 1 comment: 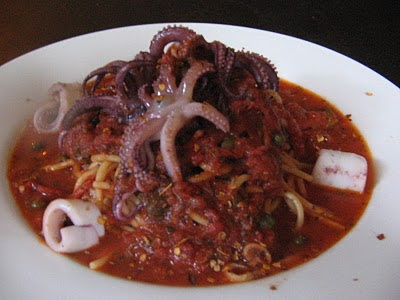 Calamares are the fastest seafood to cook. Olive oil, mince of onion and garlic flashed together with tentacles and rings then placed as a topper on your favorite pasta and Marinara Sauce. Now that's taking a trip to the shore without leaving the house! 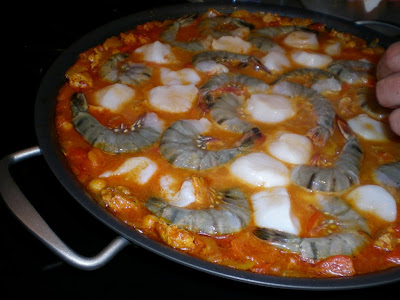 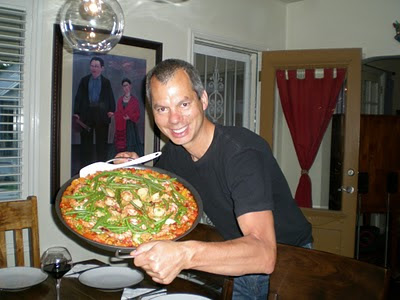 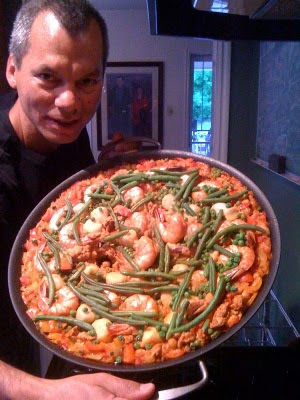 And you said you'd be happy with a Sloppy Joe. Not on your life, Papito! My brother Joe Huerta is a very good and varied cook, one that will investigate and go deep into the foods of a country, cook a complete meal and share with family and friends. He's a perfect example of why it's always mouthwatering to surround yourself with the kitchen active. It's a situation that adds the adjective "succulent" to surprise!
Posted by mick huerta at 1:32 AM 1 comment:

20 Years of Culinary Expeditions result in "SALSA! The Sauces of South America!"